In an effort to revitalize Downtown Shreveport, the Downtown Development District (DDA) has created a Street Performance Permit for performers who engage in a performance including, but not limited to, the following activities: playing musical instruments, singing, dancing, acting, pantomiming, puppeteering, juggling, reciting, or creating visual art in its entirety as a performance.

While there isn’t an influx of performers in the SBC specifically street style, some performers will jump on this opportunity if given the right “freedoms.”  This is a great way to interact with people, show them how skilled you are, and maybe make a little money, right?  We all know that some performers who engage in street performing are doing it as the primary way of making the moolah.

Here is a little meaning of what street performing is taken directly from Wikipedia:

Street performance or busking is the practice of performing in public places, for gratuities.[1] In many countries the rewards are generally in the form of money but other gratuities such as food, drink or gifts may be given. Street performance is practiced all over the world by men, women and children and dates back to antiquity. In English-speaking countries people engaging in this practice are called street performers or buskers.

This all sounds great for performers, artists, and entertainers in the SBC, right!  Well, some performers disagree.  To let you read the Street Performers Ordinance in it’s entirety, click here.  But I want to point out certain areas that need to be approved upon.  Now I know what you are saying, “Just be lucky you have a permit system in place” or “Just perform and SHUT UP!”  While this sounds great and all…and yes, I could just sign the application and pay the $30 and be on my way, but I have a voice too, Damn it!

I’ll tell you a little about myself for setting up the story purposes…I lived in the SBC area my whole life.  I like this place.  Of course, it has it’s moments, but Hey, who or where doesn’t, right?  Anyway, as a child I was very interested in the circus. (Maybe because my mom outfitted my whole room with circus related items).  While I knew I wanted to run a way to the circus, I never had the guts nor did I have a “skill”.  That is where juggling came into play…and of course, I also started for the ladies.  🙂  But I’m married now, so it doesn’t matter.  Anyhow, I’ve spent my life learning the juggle and constantly getting better and better, but I had no real pressure to start performing.  That’s when I got my first gig at age 25.  Yup! I’m a late starter.  I fell in love with performing…the look on people’s faces!  I went to our annual Mudbug Madness and met a street performer who used comedy, juggled fire, and played with dangerous objects.  His name was Dallas the Fire Guy.  Check out his work here. 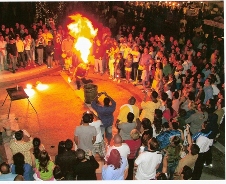 He drew massive crowds and made a good amount of tips.  He was funny and performed dangerous feats.  His son Nicktorious performed with him doing his straight jacket escape routine. (By the Way, the two will be performing at this years annual State Fair of Louisiana from October 23 to November 9, go check out their awesome show!)

I was hooked on street performing.  Since I didn’t see many “street performers” downtown, I knew something was up.  I googled street performing shreveport…and there it was…the Downtown Shreveport Street Performance Ordinance.  I was ecstatic!  Until I read it in it’s entirety.  Here are the issues I have with it…

The following regulations shall apply to performers performing in any public area of the Downtown Development District.

(a) No performer shall perform:

(1) Within ten (10′) feet of any bus stop or any designated taxi drop off/pick-up area;

(2) Within ten (10′) feet of any street corner or a marked pedestrian crosswalk;

(3) Within ten (10′) feet of the outer edge of any entrance of any business, including, but not limited to, doors; vestibules; driveways; outdoor dining area entries; and emergency exits, during the hours that any business on the premises is open to the public or to persons having or conducting lawful business within those premises.

(c) No performer shall construct, erect, or maintain any stage, platform, or similar structure for use during any performance.

(e) No performer shall use any generator, wet cell battery with removable fill caps, or connect or maintain an electrical cord to an adjacent building or to a City power source.

(f) No performer shall utilize any speaker, microphone or mechanical amplification device.

(g) No performer shall litter his or her performance site.

(h) No performer shall place any object on a public sidewalk which causes less than a four foot contiguous sidewalk width being kept clear for pedestrian passage.

(i) No performer shall leave his/her instruments, props, equipment, merchandise, or other items unattended.

(j) No performer shall perform in contravention of the allowable noise levels established by Article II, Division 1 of Chapter 58 of this Code.

(k) No performer shall block or obstruct a curb cut.

(l) No performer shall perform outside his or her designated performance zone unless given express written permission by the Downtown Development Authority or its designee.

(m) No performer shall perform between the hours of 10:00 p.m. and 10:00 a.m. unless given express written permission by the Downtown Development Authority or its designee.

(n) No performer shall solicit donations verbally or in writing at the assigned performance location. However, a box or musical case may be left open to indicate that donations will be accepted, and said action shall not be a violation of Section 50-166 of the Code.

My main juggling act, guess what, involves knives, torches, flame, axe, and saw.  (They knew I was coming).  Well that leaves that out for me.  Sure, I can go to a sidewalk 10′ from everything and juggle balls, clubs, and rings and hope someone drops a coin in my hat, but that’s no fun!

I recently spoke with a local street performer who sits on a sidewalk and plays guitar with a case in front of him stating that donations are welcomed.  He sits on a bucket with a song list, guitar, and his badge proudly displayed just playing away some old classic tunes.  I sat and listened to him for a while waiting on my chance to talk to him.  He goes by the name “Pops”.  He was an older gentleman with jolly cheeks and a long white beard (Yes, I almost sat in his lap and told him what I want for Christmas).  He stated that he was homeless, but he saved up enough money to buy the permit and played from sun up to sun down.  He was able to save enough money to buy a motor home for him and his wife and he continues to play on the streets to supply for his family.  Now that is how it’s done.  If all of the homeless in Shreveport started doing this, then the streets will be filled with performance art and a community thus started.  We love Pops for what he is doing and we hope he continues doing it.

Need more information? Click the button below to ask that question. Need booking information too? You can get it by clicking the button as well! So easy, right?